With this collaborative project, Sarband forwards its intercultural plea for peace to the world since 1998.
Starting from the ongoing fertile collaboration with the
orchestra 'Concerto Köln'  (CD 'Dream of the Orient',
Deutsche Grammophon, Echo Klassik Award 2003),
Sarband created several new versions of the alla
turca topic and performed them together with
numerous orchestras:

For Europeans, the Turks initially posed an immediate threat of war,  and it was only when the Siege of Vienna was lifted in
1683 and this danger was removed that countless Turkish fashions began to bloom in 18th-century Europe. Contemporaries
could easily gain a first-hand impression of Turkish national and military bands thanks to the ensembles that accompanied
Turkish ambassadors to various European courts.

The influence of the music of the Ottoman Empire on western music is most obvious  in the use and adaption of Turkish
percussion instruments in European orchestras. In addition, 18th-century European composers used stylistic features of
Ottoman military  music in their own compositions; this is how the alla turca style was created. Although 'janissary music',
as these Turkish military bands were called in Europe,  was still capable of making an spectacularly warlike impression,
the former picture of the Turks as threatening and bloodthirsty had changed completely: in many novels, plays, operas,
paintings and dainty porcelain figurines we find stylized figures such as  the infatuated Turk (Turc amoureux), the gallant
and generous Turk (Turc généreux)  or the wise and noble Turk (Turc noble).

The exotism of the 17th and 18th centuries drew a heavy veil between non-European cultures  and the imaginary Orient
invented in Europe.  Few Europeans had a chance to see both East and West for themselves  and to observe their characteristic features at first hand.  It is two of these travellers that we owe the transmission of Ottoman music of the 16th-18th-centuries:
the Pole Wojciech Bobowski (later Alî Ufkî, ca. 1610-75), who was sold to the Ottoman court at the age of eighteen,  and the Moldavian Prince Dimitrie Centemir (1673-1723), who spent several decades in Constantinople.  Thanks to their writings on
Turkish cultureand their manuscript collections of notated music,  these two contemporary witnesses allow us to hold up the
mirror of European exotism to its actual real-life object.

«Under the direction of Markus Poschner, the orchestra [Dresden Philharmonic] performed with the multinational ensemble
Sarband,  in a way both sensitive and stirring. ... a subtle dialogue, atmospherically evocative ... a delight for audience and
musicians.  Across all differences in form and sound, parallels and kinships could be discovered.  Turkey was not an exporting
country in a musical sense, but, in turn, absorbed Western currents.  The audience has rarely ever applauded so persistently
and so cordially.» Karsten Blüthgen, Sächsische Zeitung (Germany), 30.01.2012

«It was a light-hearted and cozy evening … in fact, something like a fusion of both musical cultures really happened …
There was even dancing: two dervishes were rotating in supreme elegance …  A light-hearted evening, making many happy.
Successful.» Stefan M. Dettlinger, Mannheimer Morgen (Germany), 22.07.2010

«Concerto Köln and Sarband fascinated with Turkish treasures,  and the dance of the Dervishes completed an evening that
came up to expectations. An inspiring night of fusion … The performance profited mostly from the five members of Sarband.
Masters on their percussion and string instruments, …  they played the key role in the realization of the Dream of the Orient
in Vladimir Ivanoff's program concept and arrangements.» César López Rosell, El Periódico (Spain), 12.03.2008

«When sufi dervishes whirl under the cross in the cupola of St. Irene in Istanbul,  accompanied by a Cologne classical
orchestra,  Sarband have again succeeded in building cultural bridges between cultures …»
Susanne Güsten, Qantara.de, 23.6.2005

«Many fascinating aspects, but most of all the immensely sensitive team-work of the two ensembles.»
Roland Spiegel, Abendzeitung (Germany), 27.10.2000 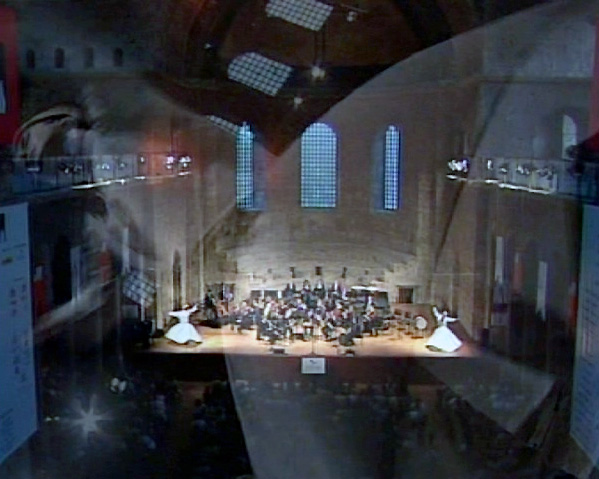 Introduction
CD Dream of the Orient 1:12