Judaism, Christianity and Islam refer to messages of salvation preceded by severe ordeals, sacrifices and passions.
All human beings experience suffering regardless of their religious and cultural background.

Suffering, like love, results in passion. Passionate emotion itself, experienced in love for human beings or for God,
can again lead to suffering. Art and religion are both capable of transcending the cycle of suffering and passion.
Then, the pure emotion of passion is transformed into a universal sphere of awareness,
of perception of the other. Passio becomes Compassio.

Passio and Compassio – in Western culture, human suffering and compassion are embodied most emphatically by the figure
of Christ, the incarnate God. No artist has portrayed human suffering, represented by Christ, as forcefully and passionately
with musical means as Johann Sebastian Bach in his Passions. As a religious message of salvation, the nativity story
exemplifies the unavoidable cycle of birth and death in a very direct way. Bach's Christmas Oratorio strongly illustrates
both theanticipation of advent and the simultaneous perception of and compassion with the inevitable, painful depart.

Today, Bach's Christmas Oratorio and Passions are perceived as iconic musical manifestations of Christian belief.
Against the backdrop of 2000 years of Christian history, however, they can be considered as rather «new» phenomena.
Vladimir Ivanoff and his Ensemble Sarband confront them with Early Christian traditional chants in Aramaic, the mother
tongue of Jesus. These musical embodiments of Passio and Compassio are framed by the ritual of the Muslim Mevlevi
dervishes, which symbolizes human salvation by way of loving union with the Creator, comparable to Christian
notions of unio mystica.

Sarband have specialized in challenging history and narratives from unusual points of view and in illuminating connections
that are obvious only to the «third ear». With his Arab, Turkish and German musicians, Whirling Dervishes, jazz saxophonists
and a jazz string quartet, Vladimir Ivanoff invites on a meditative journey through space and time,
through religions and cultures, into a spiritual space of mutual awareness
beyond personal, denominational or religious borders – Passio and Compassio.

«When I give you my love, I will arise from this life.»
Jalal ad-Din Rumi, Divan

«Probably not all musicians believe in God; but they all believe in Bach.»
Mauricio Kagel

«Between Orient & Occident - Concert Sarband at the Beethovenfest Bonn - Orient met Occident, Christian Baroque music encountered Turkish and Syrian-Orthodox chants, performed by Sarband,directed by Vladimir Ivanoff … A remarkable experiment …The key to the successful blend was the alienation effect. And the voices of the flexible, excellent Fadia El-Hage and Dogan Dikmen, who supported the alliance. The result levitated between the different traditions, shaped a bridge between Orient and Occident, summarily dissolved the boundaries between the religions and aesthetics. Beautiful the haunting "Aljawm", with an elegant solo violin and a strong vocal performance. The much-needed bridging worked well. Comprehension and awareness were created by music. Quite a few could learn from this example.»
Thomas Kölsch, Rheinzeitung (Germany), 16.09.2014

«Wresting Bach's Music From Its Western Moorings. You could hardly have hoped for a finale better suited to the theme than «Passio-Compassio», the Ensemble Sarband concert that closed the festival on Saturday evening at Alice Tully Hall.
The Sarband approach is elegant, though not timid in its wresting of  Bach's music from  its Western moorings, but
Vladimir Ivanoff, the group's director and arranger, has an unfailing instinct for finding musical ground where his
transformations seem natural.» Allan Kozinn, The New York Times (USA), 21.11.2011

«Passio-Compassio, to be exact: Passio transformed into Compassio: Emotion translated and transcended into the language
of art or religion. Sentiments that are being conveyed into a new form. It is part of the artistry of musical director
Vladimir Ivanoff to leave it up to the audience to choose whether they want to read the events on stage in a religious or an
artistic way. One is grateful for this. Genuine art subsists on the freedom of its interpreters.»
Kersten Knipp, NDR Kultur (Germany), 18.09.2010

«Passio–Compassio is a daring venture,and it succeeded: Bach and Sufi mysticism. … The connection between the world
religions Christianity and Islam, the issues of sorrow and empathy, love and passion – this programme got right to the heart
of it with irresistible wisdom and rare harmony … The hypnotically whirling dance of the dervishes and words of the great
Sufi mystic Rumi, projected to the large screen, made clear on a different level than that of the rational mind what this means:
a love divine.» Max Florian Kühlem, Ruhrnachrichten (Germany), 19.9.2010

«Bach, musical spearhead of Christianity, in sounding symbiosis with Arabic and Turkish reed flutes, fiddles and psalteries,
mingled with exotic rhythms, oriental-style coloured singing and whirling dervishes. If this circle can be squared, many
misunderstandings in the Christian-Muslim relations could be cleared up. Vladimir Ivanoff, musical spiritus rector of this
enterprise, consciously does not touch upon the core points of religious difference, but rather concentrates on the centre of
the Passion, in which Jesus, feeling forsaken by God, presents himself as a mere human being stripped of his divine mantle.
To this end, Ivanoff contrasted the Bachian contributions with chants from the Byzantine, Syriac and Arabic Christmas and
Passion liturgies, which are able, in their profound religiosity, spiritual power and great humanity, to build bridges between
cultures. Also the dance ritual of the five dervishes shows the Orientfrom a mystical perspective that points to the religions'
common roots. The colourful cast allowed exciting arrangements of well-known hymns such as «Wenn ich einmal soll
scheiden». While Fadia el-Hage turns the hauntingly plain melody into live wire with powerful emotion, oriental
embellishment and sliding intonation, the polished, crystal-clear a-cappella rendition by the young choir from Cologne
represents Western vocal art in pure beauty. In their gripping effect both performances meet without whitewashing the
differences between their glorious traditions. At the end of the day, this is not about whitewashing of cultural identities,
but about respect for the greatness of two cultures, which – at least in music – are closer to each other in their human content
than everyday headlines let us believe. Seen from this angle, «Passio-Compassio» surely belongs to the thematically most
interesting contributions to the current Triennale. Enthusiastic applause for all participants.»
Pedro Obiera, Giessener Allgemeine Zeitung (Germany) , 22.09.2010

«Sitting with his back to the audience, Vladimir Ivanoff acted as conductor, giving tone and time to the ensemble, beating
the frame drum with spare precision. The frame drum proved to be the connecting, driving force... The approaches to merging
Orient and Occident presented here were certainly original and creative. Baroque melodies were enriched with «alien» legato
passages on the flute ney. It appeared in a mysterious light owing to Arabic string glissandos on the solo violin. Lines of
baroque counterpoint flowed seamlessly into artful Arabic maqams. Emphatic, Arab-style solo singing by powerful-voiced
Fadia el-Hage from Beirout and Mustafa Doğan Dikmen (Istanbul) encounteredethereal drones of vocal ensemble Vocanima
from Cologne, which mainly typified European Early Music. … And as a climax an intense, aural as well as visual trance
arose. Seven Sufi dervishes from the Golden Horn, clad in flowing white garments, found their way into their circling,
meditative movements. In this moment, the word «trance» did justice to its proper meaning: trans-ire: transition into a
higher stage of rapture.» Stefan Pieper, nmz (Germany), 19.09.2010

« … brought cultures in touchwith each other in the Bochum industry cathedral. Bach plays music to the dervishes' dance:
«Passio-Compassio» at the Ruhrtriennale. …  The approaches to merging Orient and Occident presented here were certainly
original and creative. …. All this brought to light interfaces as well as points of friction between two highly complex systems
of  thought and music ... «Passio-Compassio» supplied a textual superstructure: Biblical passages united with source
quotations from the early Islamic and Christian world. And as a climax an intense, aural as well as visual trance
arose. Seven Sufi dervishes from the Golden Horn, clad in flowing white garments, found their way into their circling,
meditative movements.In this moment, the word "trance" did justice to its proper meaning: trans-ire: transition into a higher stage of rapture.» Stefan Pieper, nmz (Germany), 19.09.2010

«Although it sounds like a daring venture to mix Bach's compositions with the spontaneity of Arabic music, Jazz and
borrowings from Sufi mysticism: «Passio-Compassio» will be remembered asone of the most felicitous and unified
programmes of the Ruhrtriennale. The connection betweenthe world religions Christianity and Islam, the issues of sorrow
and empathy, love and passion – this programme got right to the heart of it with irresistible wisdom and rare harmony ...
German, Turkish, Arabic and Aramaic texts floated above the music in harmonious exchange. The hypnotically whirling
dance of the dervishes and words of the great Sufi mystic Rumi, projected to the large screen, made clear on a different
level than that of the rational mind what this means: a love divine.»
Max Florian Kühlem, Ruhrnachrichten (Germany), 19.9.2010 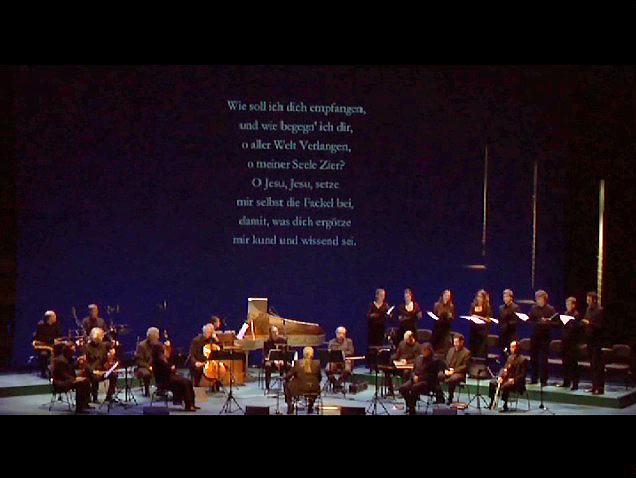 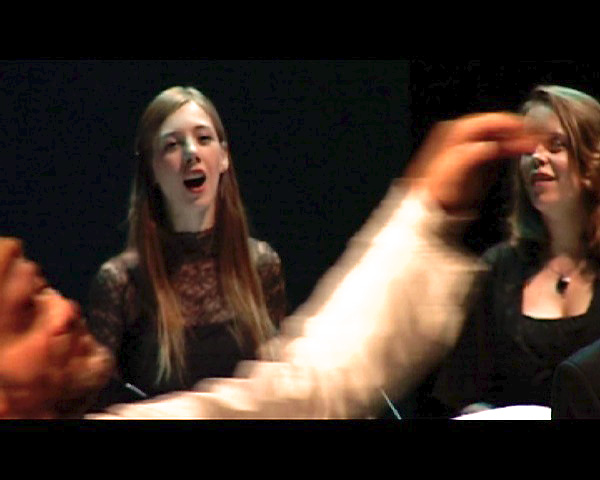