Jewish, Christian and Muslim songs
from medieval  Al-Andalus and
Sefardic culture in the Ottoman Empire
and Europe

Music that tells stories and has a long story itself:
Currents of diverse musical cultures that united in various historical and geographical places and were separated again,
driven by the tide of history.

Ensemble Sarband's musical odyssey around the Mediterranean and across eight centuries of music history
is meant neither to prove the mutual influence nor the insurmountable differences:
it paints a musical picture of the everyday life that Jews shared with Christians and Muslims  in Al-Andalus,
the Ottoman Empire and the European Diaspora.

Sefardic songs are placed beside Muslim Sufi hymns composed by a Christian convert;
the Cantigas de Santa Maria, collected by King Alfonso el Sabio in the 13th century, and Catholic polyphony
from the royal Spanish nunnery of Las Huelgas de Burgos are performed together
with Ottoman-Turkish court music written by Jewish composers.

«Chanterai por mon Corage», a lady's anxious hope for the successful outcome of her lover's crusade,
stands for the hope that a coexistence or even togetherness of cultures and religions may be possible again
in the way this musical journey tells.

«Sarband unfurl a panorama from Al-Andalus via Algeria to the Ottoman Empire. A significant part of the cheers was
directed at the vocal soloists. Exciting acoustic images are conjured, in which the origins of European tradition appear.
The audience returned home, dazzlingly enriched with sensations, experiences and information. It is very beneficial if
Europe is not the center of the musical world for once.» Monika Lanzendörfer, Schwetzinger Zeitung
(Germany), 03.05.2010 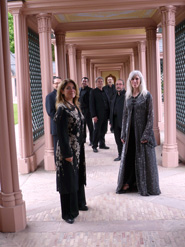