What the World Needs Now

Joel Frederiksen, the US expert on baroque vocals, and Syrian vocal virtuoso Rebal Alkhodari sing about Love,
overcoming everything, uniting everybody.

They accompany themselves on lute and oud (the Arabic lute). Mohamad Fityan and Vladimir Ivanoff,
experienced bridge builders between Orient and Occident, accompany the two on their musical voyage.

Two Syrian musicians, an American, and a Bulgarian, all migrants to Germany, share their musical homelands:
Baroque arias from Europe, American folk repertoire, Arabic art songs, and newly composed English and Arabic songs
about their cultural and musical homelands.

The US embassy in Munich was delighted by this collaboration and supported the premiere of this program in the
Bavarian National Museum Munich, October 2015.

We hope that our bridge building encourages our listeners to do the important and simple: shake hands with "the Other".
In this period of disorientation and conflict, shaking hands might be the most powerful political instrument.
The power of love.

«"What the world needs now" promised answers to the crucial questions of our times, and - remarking this beforehand - they were furnished, not with pomp and circumstances, but with soft sounds … Sarband's music does not need labels, and this is why it leads to a deeper understanding of our world. It doesn't cross borders, but is unlimited, it is not modern, but timeless. Arab 12th century music, Bob Dylan, Giulio Caccini, Scotland, Spain, the USA. Musical streams flow into each other, touch, interfuse, and suddenly you discern the river of origin … from it, emotions permeate our ears, our hearts. They don't need explanations or translations: Pentecost and the answer to the question "what the world needs now".» hs, Lauterbacher Anzeiger (Germany), 22.5.18

With their philosophy, «Ensemble "Sarband" delightsthe audience at the Speinsharter Sommerkonzerte:
Peaceful music is more powerful than the noisiness of war. There is a lot to discover in this concert: farewell and hope on reunion, homeland and outland, travels to the horizons of human warmth. To express these hopes in homeland songs - with the feeling to be at home - this is what the listeners experience with bewitchingly sweet bridge building. Closeness and yearning are the poles of this ravishing evening …  Far from the veils of folklore, the group creates an intimate alliance with the omnipresent subject of Love … "Sarband" revels in poetry. In the spiritual acoustics of the monastery, "What the World needs now" is a passionate plea for love amongst human beings…» Robert Dotzauer, Onetz.de (Germany), 23.08.16 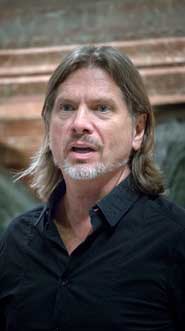