Songs from the Early Christian Oriental repertoire,
chorales by Hildegard of Bingen and Brigitta of Sweden,
sacred songs from rural Sweden,
early polyphony from the Spanish Codex Las Huelgas.
In this program we pursue the female paths
towards the cognition of God
in early and traditional sacred music
from Orient and Occident.

- Heartfelt mysticism in the chants of the two great female figures of the Middle Ages,
Hildegard of Bingen and Brigitta of Sweden.

- The direct path of the heart in traditional Early Christian music of the Middle East
and in rural songs from Northern Sweden.

- Complex contemplation in medieval polyphony as sung by the noble and literate nuns of Las Huelgas monastery.

Miriam Andersén (Sweden) and Fadia el-Hage (Lebanon) perform songs from their own oral traditions
and join in the written tradition from the Spanish Codex Las Huelgas.

«Ensemble Sarband demonstrated impressively, how beautiful music from times gone by can be…
Under the title «Vox Feminae», the wonderful voices of Miriam Andersén and Fadia el-Hage sounded in the church …
a concert, which many will remember for a long time, as the applause made very obvious.»
Dorit Schlemermeyer, Weser-Kurier (Germany), 19.03.2012

«Understanding unnecessary: goosebump-inducing voices suffice! Enthralled their audience: Sarband!
The two brilliant soloists Miriam Andersén and Fadia el-Hage sing in Aramaic … as well as in their respective
native languages. Their powerful and emotional renditions comprise songs from the early Christian Oriental repertoire,
plainchant by Hildegard von Bingen and Birgitta of Sweden, spiritual songsfrom rural Sweden and pieces from the
13th-century Codex Las Huelgas. Although hardly anybody in the audience understood the pieces' contents,
the excellent singers presented an enchanting, even affecting concert … In the end, the applause was incessant…
A very successful performance with great acoustics in the beautiful atmosphere of the church.»
Pia Zarsteck, Kreiszeitung (Germany) , 19.03.2012

«Harmonic fusion as Utopia – it can be found in music … this results in a tapestry of sound, in whose texture the Oriental
and Occidental strands have become hardly discernible – a wonderfully melancholic ideal. …»
Nicole Strecker, Ballettanz (Germany), 4-08

«The music is simply brilliant. Ensemble Sarband plays and sings the stars out of the sky.»
Danielle de Regt, De Standaard (Belgium), 11.02.2008

«The vocal performance … was perfect … The meeting of the Swedish and Lebanese singers even enhanced the beauty
of the vocal colours. This admirable concert is achieved by merely three artists.»
Guillaume Orly, L'Alsace Le Pays (France), 23.09.2001 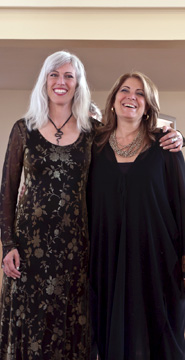